11/6/15 – We went to bed so early last night, that we’re both awake around 5AM.  Well, that gives us plenty of time to get ready and have breakfast.  We went to the hotel restaurant again.  They have a buffet for $20 – a little more than I really want to spend on breakfast, but the a la carte menu is kind of pricey too.  Ok, fruit, eggs, toast and juice.  I’m ready for the tour.

We’re downstairs right at 7:45 for our tour.  We’re told it’s going to rain so we get umbrellas from the front desk.  Never used them – just something extra to carry around.  While we’re waiting, one of the bellmen asked what tour we were doing.  Half day rainforest – he says, they’ll be here at 8:05.  Sure enough, our guide showed up right at 8:05.  We had 4 more hotels to stop at before we really get on our way.  That’s the main reason I don’t like organized tours.

Our guide is Lismal.  She’s very knowledgeable and entertaining.  The last 2 hotels were in Condado and as we were driving through she pointed out a couple of good restaurants.  Then she pointed at Subway and said “No Subway!”.  Then Chili’s – “No Chili’s!  You are in the Caribbean!  Eat local food!”

We continued on through the countryside with Lismal pointing out little towns and the mountains we were headed to (the Sleeping Giant for the formation).  I always love getting to see some of the countryside of the islands I visit.  We arrived at El Yunque National Rainforest, which is maintained by the US National Parks Service.

We drove into the lowest level of the park, then continued on up to the 2nd level where we parked.  We had a chance to take a few photos and Lismal found this snail on a tree.

She said there are brown and green ones.  We then took a walk up a little into the forest to Bano Grande 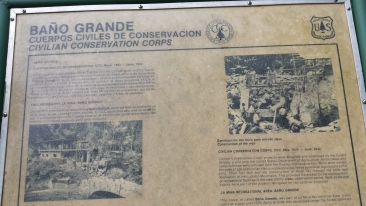 which was built as a swimming pool by the CCC in the 1930’s.  It’s very scenic up here.

After this we walked back down to the road and had to walk in the road for awhile to get to the Caimatillo Trailhead.  Apparently during the last big storm, there was a lot of damage and some areas of the trail washed out.  They are working on repairing it now.  We went up this trail and Lismal pointed out different trees and told as about the flora and fauna in the forest.  We stopped by a stream and she got down and got a couple of rocks which she rubbed together.  Doing this made a mud ink/dye.  She explained that the Tainos used this to paint their faces, and she demonstrated on those of us that would let her.  She mostly did faces, but with me she used my upper arm.  She made 3 different colors using different combinations of rocks.  Very interesting. 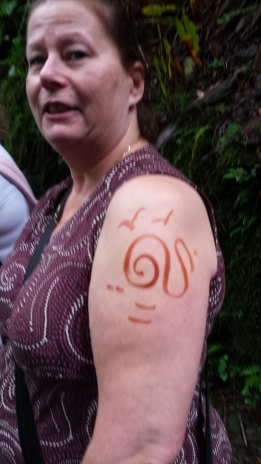 From here we got back in the bus and went down to an observation tower which is 75 feet tall.  It has incredible views.  I took the stairs up and there are windows at all the landings.  You really get a great variety of views. 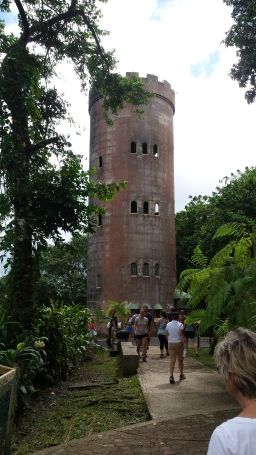 Our last stop was a La Coca waterfall.  It is right on the road so very easy to get to and take pictures. 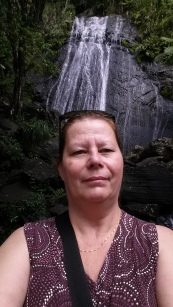 Then we headed back into San Juan and, of course, we were the last stop.  We rested up a bit when we got back and then headed out for lunch.  While waiting for the tour I had asked the bellman where to go.  He pointed down the street in front of the hotel entrance and said go a block, then up the stairs and there is a whole block of restaurants serving Puerto Rican food.  Ok, that’s where we’re headed.

We come out of the stairway and sure enough, across the street is a row of restaurants.  We’re kind of looking back and forth when I see Raice’s. 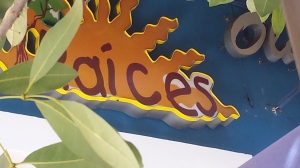 This was one of several restaurants a friend of a friend had recommended, and Lismal and recommended it as well so we decided to go there.  There was a short wait, and finally we got a table – right next to the cash register so we constantly had wait staff standing almost on top of us.  I was a little disappointed when I looked at the menu because it was more of a dinner menu and most of the food looked heavier than I wanted mid-day.  But after getting a beer, I was getting a little more into the mood.

Finally we each found something that sounded good.  Frankly, I thought the food was so-so.  Their menu on line here looks better than the choices we had, and there were no $6.95 specials.  My feeling about this restaurant is that it has gotten well known and maybe lost some of it’s original charm.  The employees, for the most part, did not look like they were happy to be there.  Not my favorite on this trip.  Oh, well, it filled us up.

After lunch we took a little walk around Old San Juan then back to the hotel.  Pam hadn’t been feeling real well since the bumpy bus ride back from the rainforest, so she decided to rest in the room.  I took my book and headed up to the pool.  It was failry cloudy, but still nice and warm.  After about an hour, it started to rain so I checked on Pam – still resting- so I headed down to the bar where the bartender made me a Puerto Rico Sunset.

Pam showed up after a bit and we had some dinner and an early night again.